If you’ve tried your hand at PS2 emulation with PCSX2 for any length of time, you’ll know that it’s an impressive but thoroughly imperfect emulator that needs a guiding hand more than most. There’s really no one-size-fits-all setting solution when it comes to PCSX2 configuration (other than setting it to software mode and leaving it there, and even then you’ll still run into some issues, just much less frequently) which means that you really need to create configurations on a per-game basis to get the most out of it. This is often a slow, tedious, and incredibly time-consuming process of testing, making changes, reading wiki and forum posts, testing, making more changes, and then testing some more. In some cases, it’ll never be perfect, regardless of settings used but with some adjustments you can get it “pretty close”. Some cases are nigh on perfect and others are a broken mess with any setting (even software, in a few cases). There are a significant number of one-off fixes that are often necessary in games, from special hacks, to fixes like running all FMVs in software mode, to things like skipdraw for disabling buggy post-processing effects and TC offsets to fix sprite alignment issues - all kinds of things that are needed to offset various visual bugs brought on by upscaling. It’s just the nature of the thing.

I’ve been using PCSX2 for a while now - since version 1.2.1 (2014). My Launchbox library had been a mishmash collection of configs for versions 1.2.1, 1.3.1, and 1.4.0 so several weeks ago I decided to finally break down and go through the process of updating all of these to 1.5.0 (1.6.0 now) and then try to add more once that was complete. The thought occurred to me though, that if I was going to go to the trouble of doing this, I might as well share them here for others to use as well. That presented a question, however, as to how best to distribute them. PCSX2 is a bit more complicated when it comes to creating and using custom configs - you have to duplicate not one, but several .ini files that contain various settings that PCSX2 will use, and then direct these specific .inis to PCSX2 via command-line (--cfgpath “[path\to\the\config]”).

User @alec100_94 created a great plugin for Launchbox called PCSX2 Configurator that helps automate the configuration creation process by duplicating sections of your current .inis into a new folder named after the game title, then injects the appropriate command-line parameters into that game’s Launchbox library entry. As an added bonus, it can even create independent memory cards for each game. I thought this might be a way to at least help simplify the process for people so they could more easily use the configs, so I contacted him about it about a week ago to get his thoughts on it. To my surprise, not only was he willing to help me in my attempt to streamline the process for people, he offered to come up with a way to incorporate the configs into the plugin and allow users to download and apply them directly from within Launchbox. So we had a lot of back and forth over the course of the last week and did a lot of testing and now we’ve ended up with something I’m really happy to say works very well. Exciting! Major props to Alec for all his hard work on this (and for putting up with all my picky crap

Note: All tech support requests for the plugin itself need to be directed to Alec on the Launchbox Discord, not here. Our Discord server can be accessed here: https://discord.gg/AFxfhnv Go to the plugins channel and message @alec100_94#4327

All you need to do is download and install the plugin, then right-click on a Playstation 2 game in your library, and then click on the "PCSX2 Configurator" option at the bottom of the right-click menu.

From here you can either click "Create Config" to create your own config (or overwrite your current config) or "Download Config" to download mine. If I've created a config for the game, the "Download Config" option will be enabled (lit) - if I haven't, it won't be (note that a takes a second or two for a match to be made, so "Download Config" won't immediately be lit even if I've created a config for it). If I've updated a config since you originally downloaded it, an update option will be lit which can be clicked to update the config to the newest version. Once you've downloaded or created a config, the "Remove Config" and "Configure with PCSX2" options will be usable. Clicking "Configure with PCSX2" will open PCSX2 for you to edit that config as you see fit. Once a config is present, the right-click "Configure" option will do this as well.

The games must be scanned and matched with the LBGDB first! The LBGDB ID is how configs are matched, so you must do this first. Once they're scanned/matched you're ready to go - just right-click -> PCSX2 Configurator -> Download Config and you're all set! 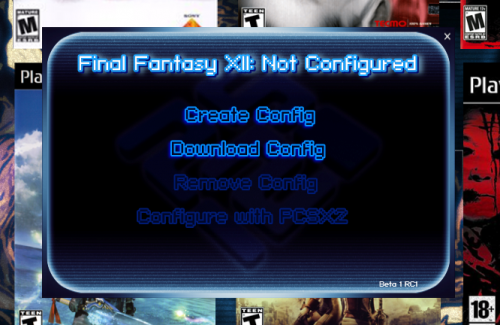 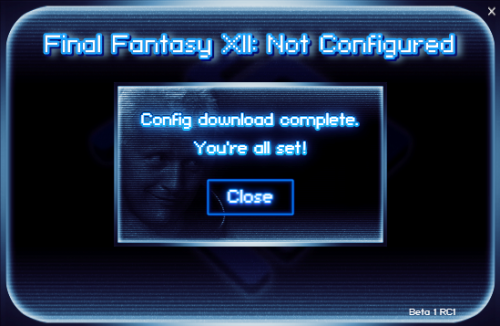 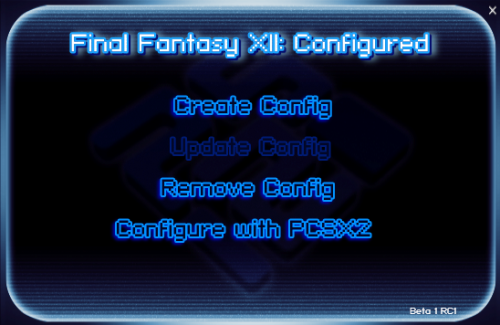 Now that everything's squared away with the plugin, I'll be able to get back to working on more configs going forward. Right now I’m at 86 configs [EDIT: up to 285 currently]. Not a whole lot, I know, but it’s a start. I’m open to requests, but understand that I’ve already got a stack of about 200 more games that I have set aside to work through as a start (to-do list is at the bottom). I’m prioritizing stuff that’s 1) of interest to me and 2) don’t sound like they have huge game-breaking issues based on their PCSX2 wiki page. The PCSX2 compatibility wiki is kindof a mess that isn’t particularly well-documented and, in my experience, is frequently full of outdated and/or outright incorrect information, but it’s at least a sortof starting reference point for whether or not I decide to try out a game. Also try to keep in mind that this is often a very time-consuming process so don’t expect to see 20 new configs added in a day. In cases of really severe complications, it can be 30 minutes to multiple hours of testing and tweaking for one config.

I have an ongoing spreadsheet detailing what’s in each config as well as some additional notes where appropriate and a rating of what I consider to be the relative significance of emulation issues present for that game, from minor/nonexistent to moderate to broken. Software mode is generally only used as a last-resort when no other hacks or fixes could resolve various issues brought on by hardware rendering, but be aware that there are some configs that use software rendering because of this. I’ll periodically be making updates in this thread to note new configs that are added, and of course the spreadsheet will be kept up to date.

The configs are fairly moderate in terms of system requirements, as my PC is about 4 years old (EDIT: 7 years old) at this point (specs at the bottom) and can often push these a bit higher than what’s included in the configs, depending on the game, but realize that there’s going to be some variance in performance depending on your hardware. Because of this, I wanted to provide some tips below on how these can be altered to improve performance.

As part of the update process from 1.5.0 configs to 1.6.0, I went through and benchmarked all configs with the framelimiter off, and made adjustments as necessary. The end result should be better performance (at the very least, better maximum performance, whether you actually need that or not) for everyone. Some key elements that can be used to improve performance (and generally have been used already where appropriate) are listed below.

Enabling MTVU is often a good starting point for improving performance. It has high compatibility and is an easy go-to. There are some cases where it causes problems in a game that I've noted on the details spreadsheet. This is generally enabled where appropriate and where there was an actual impact on performance in testing. 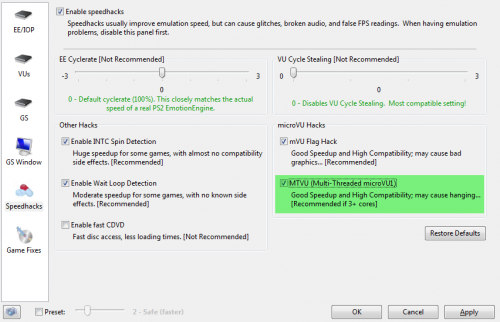 If necessary, you can also try dropping the scaling by 1x at a time until performance improves. It should be noted that some games are more CPU-limited than GPU-limited, in which case reducing the scaling can have little to no impact on performance. It's something to try if performance is poor, however. 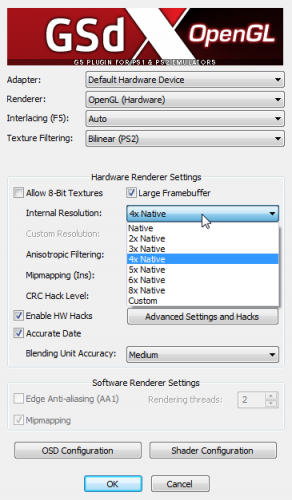 You can also try disabling Large Framebuffer. This is a parameter that used to be on by default but no longer is. It serves a primarily niche purpose as it only affects a small number of games (FMV flickering with it off) but can often negatively impact performance. I've generally disabled this in cases where appropriate, didn't cause an issue (or the issue could be remedied in an alternate way), and actually did improve performance in testing, but there may be additional cases where disabling it would be beneficial. 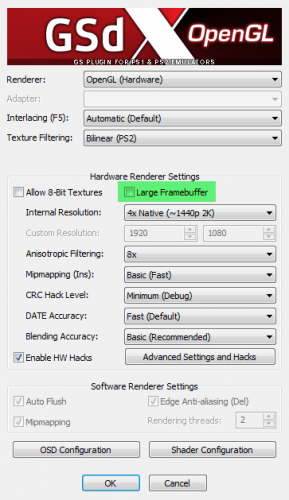 Enabling Allow 8-Bit Textures can also improve performance depending on your hardware and the demands of the game. It basically shifts the demand on the CPU and GPU. 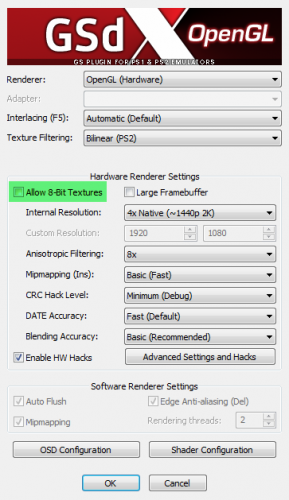 One additional thing you can try is changing the sync mode in the SPU settings from timestretch to async. I mention this one last because it has the highest probability of causing problems, but compatibility is still quite good overall. Basically what this is doing is changing it so that audio and video no longer have to be 100% synced at all times, which sounds like a bad thing but in practice it’s not. With timestretch there can be times where, if the game is performing poorly, you’ll get this really awful, stuttery, warbled mess for the audio because it’s going out of its way to keep them in sync and it creates a bit of a mess. Async can make these problematic moments much less noticeable. It's useful for games that have occasional and brief dips in performance - if a game is just constantly running at 50% speed though, the only thing it's going to do is make the audio way out of sync from the game. 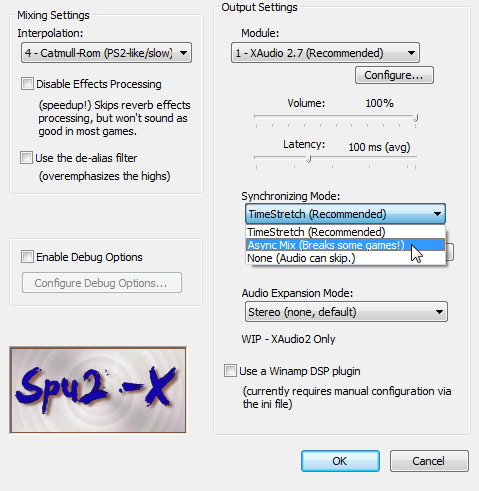 You can also try adjusting the EE Cycle Rate, but I don't recommend doing this unless you really have no other option. It can be helpful on occasion, but it has a significantly higher probability of breaking things, so leave it alone unless absolutely necessary. I would highly recommend that you never change EE Cycle Skipping at all, as it has an even greater chance of breaking things, causing dropped frames, giving false speed numbers... just leave it alone.