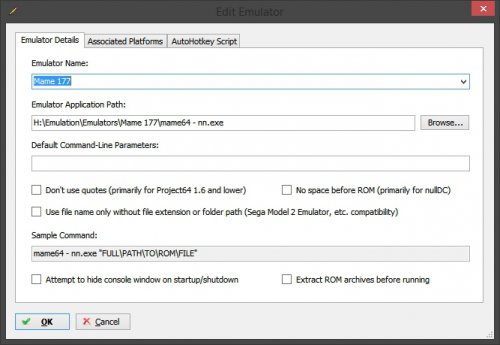 Port Audio:
Port Audio is a new feature that came in with version 0.182 and allows for much lower latency in the audio which means things like sound effects are heard much closer to when you are supposed to hear them. Things like punches, menu selection sounds and rhythm games are the most noticeable places for this. To take advantage of Port Audio you will need to edit your mame.ini file and look for the sections to make the following changes:
# OSD SOUND OPTIONS
#
sound portaudio
audio_latency 1
#
# PORTAUDIO OPTIONS
#
pa_api "Windows WASAPI"
pa_device default
pa_latency 0.003334
WARNING: There is one drawback to this new feature however. Mames sound will take over all audio from your computer so if you like to play music through your system while playing Mame games at the same time you won't be able to do it. Maybe there is a workaround to this.

Romsets: Merged vs Split vs Non-Merged, what's the difference.
In your search for rom sets for Mame you will come across those terms and here is a straight copy paste of the difference from a certain "dome of pleasure".
A non-merged set is one that contains absolutely everything necessary for a given game to run in one ZIP file. This is ordinarily very* space-inefficient, but is a good way to go if you want to have very few sets and want everything self-contained and easy to work with. We do not recommend this for most users.*
A split set is one where the parent set contains all of the normal data it should, and the clone sets contain only what has changed as compared to the parent set. This saves some space, but isn’t quite as efficient as a merged set.
A merged set takes the parent set and one or more clone sets and puts them all inside the parent set’s storage. To use the existing Pac-Man example, combining the Puckman, Midway Pac-Man (USA) sets, along with various bootleg versions– and combining it all into ((PUCKMAN.ZIP**, would be making a merged set. A complete merged set with the parent and all clones is the most common format MAME sets are stored in as it saves the most space.
* obsolete for current standards, as it's based on ancient disk space usage and costs
http://choccyhobnob.com/articles/demystifying-mame-roms/
This image should help explain the difference in a visual way.